Late last week, Amy and I took Titus and started out on our evening walk. As we walked along we realized the light was really changing and becoming unusual, and as I looked at the clouds I had a sneaking suspicion we were about to see some lightning. Sure enough, off in the distant I caught sight of a flash and we decided we'd better head back and grab some cameras!

This first image we got driving out to a field where we thought we'd have the best chance to capture the sunset and the lightning. Because it was raining, the sunset light was reflecting in all the rain droplets, and so the sky all around us lit up that brilliant orange color. 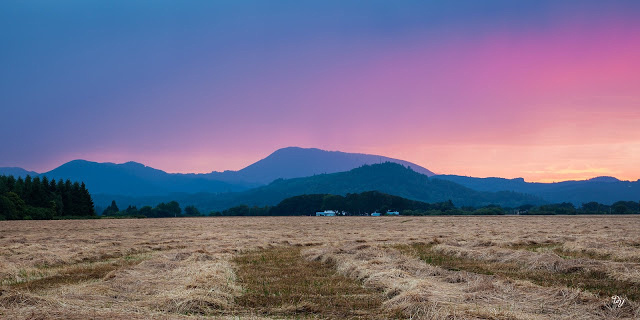 It pays to know your surroundings in photography. I was able to get this image because Amy had explored months ago, and knew of this field that had an uninterrupted view of the coast range and Mary's Peak. While we were out here, the thunderstorm was continuing to drop lightning - we saw several big horizontal strikes out above Mary's Peak that were simply spectacular. And how I wanted to capture it in the camera!

Unfortunately, because it has been so long since I've shot lightning (we don't get many opportunities for practice here in the NW), I had the camera setup differently than I needed to get the lightning. So use your imagination, and pretend there is a brilliant fork of horizontal lightning above Mary's Peak in the above image :-). We saw several flashes like that while out, and even one vertical one that came down almost exactly on the top of Mary's Peak.

By the time we'd driven out to the field, setup cameras and tripod, and then taken some pictures, it was nearly dark. We needed to take the baby home, but I was still desperately wanting to capture some lightning strikes. Alas, it was not meant to be. I knew we had some good photos already, so the trip was worth it - but I wanted lightning! I took a few super long exposure images just as we were leaving, hoping for a big flash to drop into my frame. But it wasn't to be.

However, when I got home and began to do my work in Lightroom, I was able to do a black and white conversion on one of the last images. It made the movement of the clouds come alive, as well as enhancing the detail in the hayfield. This produced a unique image that wouldn't have happend otherwise. I love photography for just this sort of thing, you set out to capture something, but you may come back with something different and unexpected, but no less wondrous. 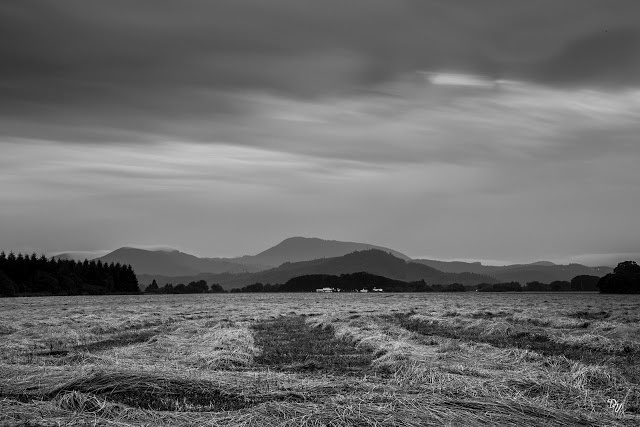