April 18, 2012  •  Leave a Comment
Hi everyone,
Like I posted about earlier, this past Saturday we went up to Woodburn to photograph the tulip fields at the Wooden Shoe. It was a spectacular day, warm, light breeze, and blooms everywhere. The kind of day that makes you feel like everything is in its place. A great day to relax and welcome Spring!

Now, while the outdoorsman in me was drinking it in and thinking this was fantastic, the photographer in me was having a much more challenging day. I had hoped to setup the GigaPan and capture some gigapixel images of the tulip fields. Part of what made the day so wonderful was the white puffy clouds dotting the sky, like sheep in a field. But that also meant they periodically drifted across the sun, which changed the light completely. And this in turn meant that any gigapan I was going to create would have been splotchy and funny looking, because as you stitch images together to make a gigapan, if the light is not very close or the same in each frame you capture, it ends up creating aberrations in the final image. Then, as the sun was higher and there was starting to be some consistent light, the crowds showed up and there was no way to capture the kind of epic shot I had in mind with out lots of people in it. So gigapanning was out, at least for that afternoon.

Frustrated that my initial idea hadn't panned out (get it? gigapanning, panned out, heh), I snapped some random images just to feel like something was getting created. But they weren't very good, and I couldn't get the close crops on the tulips that I wanted, because I didn't have a macro lens. Which led to more feelings of frustration.

About that time, Amy came out to photograph, having gotten little Titus squared away in his stroller. As is her usual way, she pointed out (after listening to me vent) that I had a choice to be frustrated and feel like the day was a waste artistically, or I could think of something/somehow else to photograph and still get good pictures, even if it wasn't what I had initially planned on. She was having no problems taking pictures that were visually arresting and satisfying to her, because she wasn't worried about all the technical things I was thinking about. She was just focused on finding someway to get good photos with the gear and conditions at hand. Well, duh....why didn't I think of that?

So that led to pulling out the 2x extender and our 70-200mm lens, which when put on our 7D that due to its APS-C sized sensor has some extra zoom, made quite a serviceable macro setup. Of course with a zoom somewhere around 600mm when all factors are considered, shutter speed and ISO settings became an issue in order to get sharp pictures handheld. That, and you lose a couple of stops of light going through the extender. Fortunately, modern cameras like the 7D have such low noise even at extreme ISOs, that I was able to get a fast enough shutter speed to handhold the beast of a lens and still get sharp images. Below are some of our results from the day. You can also see these, and more soon, in our Recent Work gallery on our website: D'Vine Photography - Recent Work Gallery

And I'll leave you with one last thought, having spent the day surrounded by flowers and examining them from all angles, to get photos. This verse kept just recurring in my head as I'd find a new variety of tulip, or the geometry of the petals and light dancing through them had me standing, sitting in the dirt, and lying down to get the shot.

"... See how the lilies of the field grow. They do not labor or spin. Yet I tell you that not even Solomon in all his splendor was dressed like one of these." Matthew 6:28-29 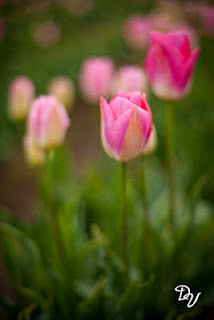 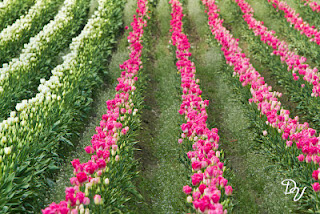 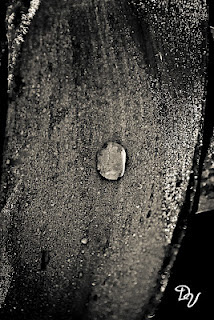 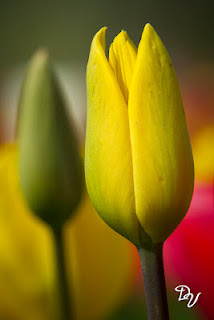 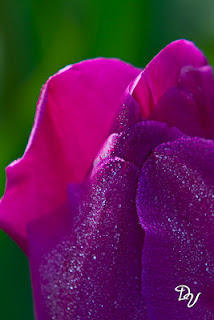 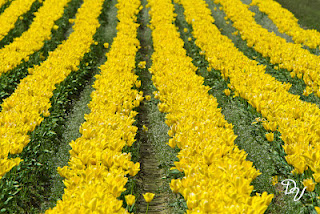